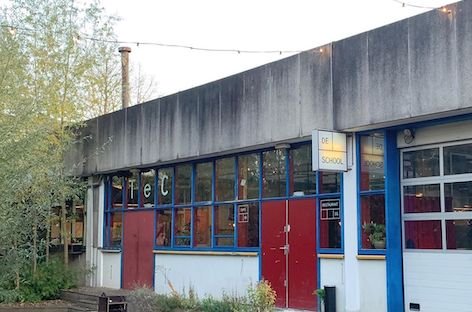 The Amsterdam venue has received an extension on its lease, originally set to expire this year.

De School will remain open into 2022. The renowned Amsterdam club, originally planned to close in 2020 when its lease expired, announced today that it will have “at least another four seasons.” De School’s programmer Luc Mastenbroek (AKA Luc Mast) confirmed to Resident Advisor that the club received an extension on its lease ahead of planned development for the site. It’ll now close “sometime in 2022.”
“De School was always meant to be a temporary five-year project,” Mastenbroek said. “This year would have been our final year, after which we had to move on like Trouw and 11 did before us. But with the current situation, and not having a reopening date in sight yet, we are very happy we got the chance to stay longer. It’s not entirely clear exactly how long we can stay, but the extension should give us a chance to meet again on the dance floor.
“It feels a bit weird to talk about extra time for the club when we cannot be there right now, but then again some good news was very welcome this week. So many things we were excited about these months could not happen. Hopefully this extension gives us a chance to see these plans formalized, while working on new dreams too.”
The club, housed in a former school, is currently closed until September 1st in accordance with the Netherland’s ban on public events during the coronavirus pandemic. Its restaurant and cafe will open starting next week, and “at the end of June, we’ll open the rest of the building too for a new art project,” according to Mastenbroek.