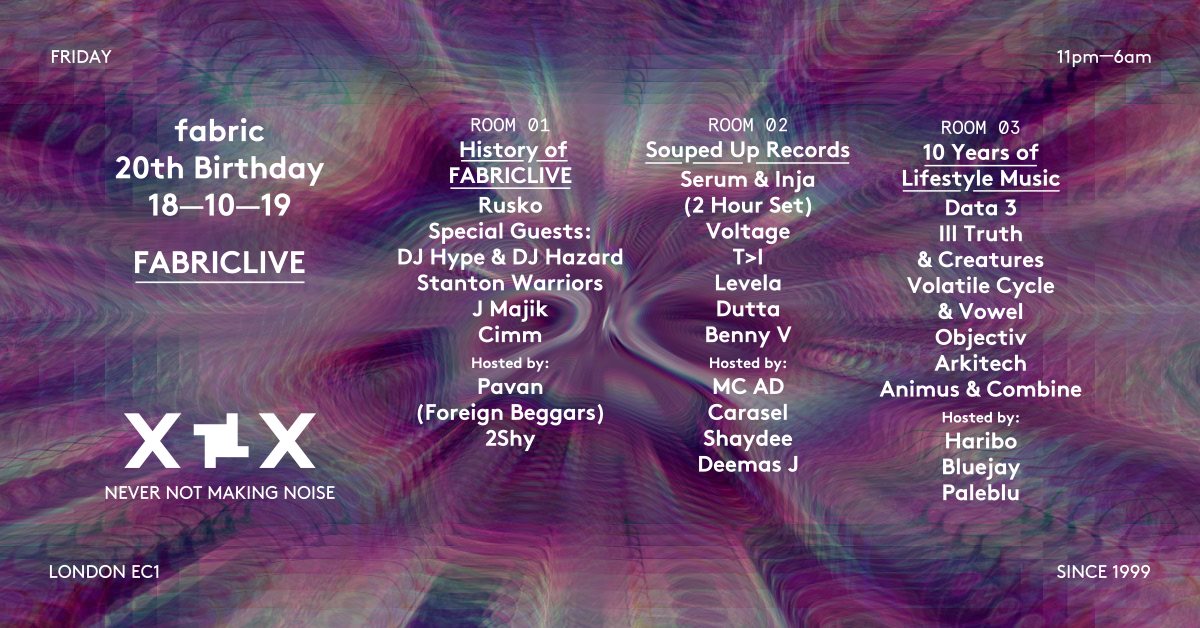 We look back on the history of FABRICLIVE as part of our 20th birthday celebrations. Fresh off the back of their ‘Rise’ launch party earlier on this year, long-time Farringdon favourites Stanton Warriors return. The breaks legends had a big hand in shaping the early years of FABRICLIVE, holding things down as one of our first Friday night residents. They prepare to present their trademark take on club-driven bass, garage and breaks. Repping the 140BPM end of our programming, Rusko makes an overdue return. Dubstep was famously championed early on within our walls, and Rusko was instrumental in giving the sound exposure across the world. The landmark FABRICLIVE.37 album he released alongside Caspa was a definitive moment for the genre, introducing the sound to a new generation of producers and dance music fans alike. This October, he brings his heavyweight strain of bass back to our space. Drum & bass is also a huge part of our story. Landing from the D&B world is scene pioneer J Majik, who’s been playing with us for our entire history. Our residents Mantra and Cimm both also touch down to represent the future and latest evolution of FABRICLIVE, with Foreign Beggars luminary Pavan holding down mic duties. We also welcome a crew of heavy hitters suitably fitted to FABRICLIVE’s 20th anniversary celebrations – more info on this is due to drop soon.
Souped Up Records run Room Two. Serum’s imprint has quickly become of D&B’s best loved over the last few years, and for his first showcase with us, he invites the key faces from his roster alongside a team of his closest affiliates. The Souped Up chief links with Inja for a high-octane two-hour set. They’re flanked by label mainstays Voltage and T>I, while new school talents Levela, Dutta and Benny V all come along for the ride. AD, Carasel, Shaydee and Deemas J step up on mic duties.
Room Three marks another anniversary, as Lifestyle Music celebrate a decade of putting out full-depth drum & bass sounds. The outfit assemble a killer team for the occasion, as Data 3, Ill Truth & Creatures, Volatile Cycle & Vowel, Objectiv, Arkitech and Animus & Combine all take over the decks. Haribo, Bluejay and Paleblu take charge of hosting to round off a very special FABRICLIVE edition in our XX series.
Update: We’re thrilled to announce FABRICLIVE favourites DJ Hype and DJ Hazard will now join us as very special guests. The Playaz keystones are set to go head-to-head for a drum & bass tear-out on Room One’s Martin Audio rig.
fabric. London EC1 since 1999: never not making noise.
—
Advance tickets: These are valid all night and give priority entry until 1am. If you arrive after 1am you will be asked to queue with non-ticket holders.
Entry before midnight tickets: These give a price discount for arriving before midnight. If you arrive after midnight you will be asked to pay the price difference for top tier advance tickets.
fabric is an over 19s venue
Please remember to bring ID with you. No ID, no Entry.
fabric operates a zero tolerance policy to drugs. Anyone found with illegal drugs will be banned from the venue and reported to the police.